With the gift of the Arthur Tress Collection of Japanese Illustrated Books, the Penn Libraries has secured one of the best – if not the best – most complete and widest-ranging collections of Japanese illustrated books in the United States. The Tress gift joins recent gifts of Japanese prints to form an exceptional collection of the Japanese graphic arts spanning the past four centuries, transforming Penn into one of the leading institutions in the world for this rare and important material.

Acclaimed photographer Arthur Tress (b. 1940) began collecting Japanese illustrated books in 1965 when he was visiting Kyoto. Collecting “on an artist’s shoestring budget,” Tress explains that he built the collection “pour l’amour de l’art [for the love of art].”

For more than fifty years, Tress collected widely and with an eye for quality and rarity to amass an extensive and important collection of over 1,400 titles dating from the late 17th century through the 1930s that has now been appraised at $1.5 million. The collection includes popular illustrated books, such as novels, guidebooks, theater books, and the like; deluxe limited-edition poetry, erotica, and artist-centered books; exquisite editions of books on kimono design; and much more. There are examples of every kind of book produced between the mid-17th century to the early 20th century, making this an exceptionally comprehensive collection. It includes rarities such as a period woodblock and a metal movable type early modern Korean book.

The collection includes titles from a who’s who of Japanese artists. Among the most famous of the titles are acclaimed works such as Shusui’s Tales of Ise (1767), Hosan’s Famous Views of Bitchu (1822), Rinsho’s Book of Caricatures (1770), Hokkei’s Tokiwa no Taki (1833), Hōitsu’s Drawing Book of Oson (1816), Hokusai’s One Hundred Views of Mt. Fuji, Ryūsui’s Treasures of the Sea (1774), and others. Other artist names include: Suzuki Harunobu, Nishikawa Sukenobu, Adachi Ginko, Utagawa Kunisada, Utagawa Kuniyoshi, Utagawa Hiroshige, Katsushika Hokusai, Hanabusa Ippō, Hasegawa Settan, Tani Bunchō, Kameda Bōsai, Nakamura Hōchū, Kitagawa Utamaro, and many more.

In the spring of 2017, Tress was seeking a new home for his collection. He reached out to Julie Nelson Davis, professor of the history of art at Penn, a leading researcher in Japanese material culture, after reading her book Partners in Print: Artistic Collaboration and the Ukiyo-e Market and realizing they both were deeply interested in the genre.

“Working closely with Kislak Center curators, Julie has built a wonderful collection of Japanese books and prints,” says Will Noel, Associate Vice Provost for External Partnerships, and Director of the Kislak Center for Special Collections, Rare Books and Manuscripts and Director of the Schoenberg Institute for Manuscript Studies. "Not only will Arthur's gift add significantly to our holdings, it will profoundly enrich Julie's collaborations with her colleagues as they train the next generation of scholars."

When Davis visited Tress at his home to assess the collection, she was amazed. “The best of the collection is on par with the finest printings in the Pulverer Collection of the Japanese Illustrated Book held at the Freer and Sackler Galleries at the Smithsonian, the Spencer Collection in the New York Public Library, the Ravicz Collection at the Chiba City Museum of Art, in Japan, and the Vershbow Collection at the Metropolitan Museum of Art,” says Davis. “However, the Tress collection surpasses these in their range, as Arthur selected works of illustrated fiction, erotica, humor, and other works that those other noted collections do not include.” 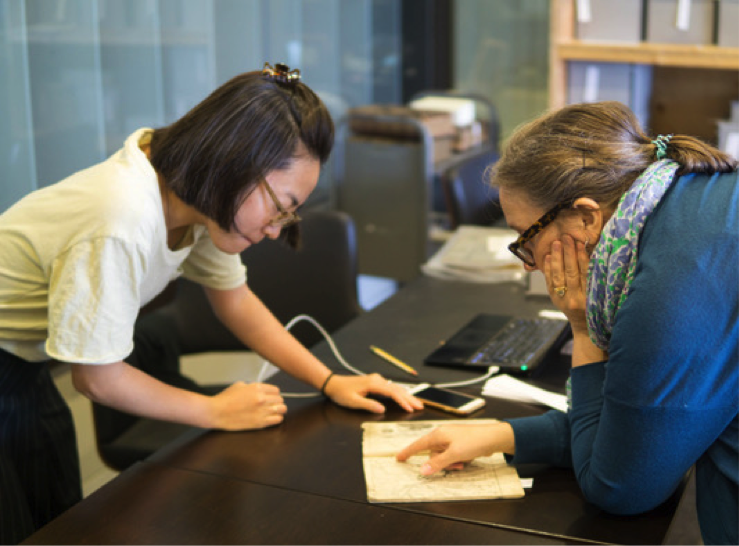 A year later, Tress visited Penn and decided to give the entire, ninety-box collection to the Kislak Center. Davis and her team of graduate students made the first-ever complete inventory of the collection. In the process, they encountered many of the finest printings of acclaimed masterworks and discovered many titles not held in any other collection – even in Japan.

Davis is currently working with her graduate students on an exhibition featuring masterworks from the collection, accompanied by Tress’s photographs. It is anticipated to be on display spring 2021 in the Goldstein Family Gallery in the Kislak Center.