Jessa Lingel is an assistant professor at Penn’s Annenberg School for Communication. Lingel’s scholarship focuses on the intersection of digital culture with social change: broadly speaking, she studies how communities — especially marginalized communities — employ technology to reinforce their values, objectives, and identities.

Prior to pursuing her PhD in Communication and Information, Lingel earned a Masters of Science in Library and Information Science from Pratt Institute. She also worked in several libraries, including the Occupy Wall Street People’s Library and the Digital Media Library at MTV Networks.

We recently spoke with Lingel about her books, her current scholarship, and her ongoing work with libraries.

Could you map the conceptual connection between your background in librarianship and your current scholarly work?

As a librarian, I learned about the process of taking an artifact and transforming it into another kind of artifact. As a researcher, I’m interested in the different kinds of technologies and artifacts that communities create to meet their needs or reflect their histories.

Technology is the key link that connects the different kinds of work that I’ve done. At MTV, I worked on a team that was digitizing their massive collection of film and audio. At the People’s Library, I was part of the crew that catalogued the collection into a LibraryThing account. (I was also there the day we were organizing and taking back books that the city had taken when they raided Zucotti Park.) And in my work now, I like to say that I study the technological distributions of power — which really just means the ways that technological use, design, and access can help us understand power relationships.

In your research for your first book — Digital Countercultures and the Struggle for Community (2017) — what was the most striking example you encountered of a counter- or sub-culture using digital technology to community-build and/or share information?

Drag queens had a particular practice that is simultaneously extreme and super-familiar to people on social media: many of them maintained multiple Facebook accounts, which they called “boy” pages or “queen” pages. They used their queen pages to promote upcoming performances and to connect with their fans. The boy page was used to maintain ties outside of the drag community.

At first I thought having two accounts was about wanting to keep being a drag queen in the closet, so to speak — that people wanted to hide their drag queen identities from their straight or conservative friends. This was true in a couple of cases, but it was a much more common practice for people to use boy pages as a way of being on Facebook without having to do the work of being in drag on Facebook. Managing their queen pages requires a lot of emotional labor — they’re flirting with their fans, teasing other queens, promoting their upcoming shows. Sometimes people just wanted to be on Facebook and see what their friends were up to without doing all the emotional work of being in drag.  And this is where I think the drag queen practice of having multiple accounts feels familiar to a lot of us who are struggling to manage our many different interests and communities. We might get annoyed when a coworker friends us on Facebook or when a family member pings us on LinkedIn because we divvy up our different communities into different online platforms.

Your forthcoming book — due out in February — is An Internet for the People: The Politics and Promise of craigslist. You describe it as “a social history of the internet, told through the lens of craigslist.” Why craigslist? 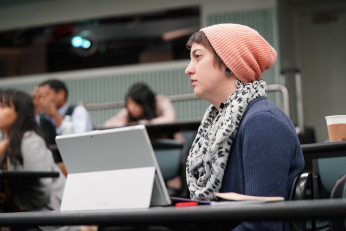 For one thing, it’s been around a long time — in internet years, at least. It started as an email list in 1995 and went online as a website in 1996 — before Google and way before Facebook.  craigslist is also very stable; its appearance has barely changed in the last 20 years. It’s stable financially, too: shares are held by founder Craig Newmark and CEO Jim Buckmaster. As a result, Newmark and Buckmaster have been free to pursue their own vision of what the internet should be without worrying about shareholders want (which is almost always to maximize profits). So, in a lot of ways, craigslist is like an island of stability surrounded by a constantly shifting digital ocean.

Describe your current work with libraries.

For three years, I volunteered with the Philadelphia Prison System as a librarian. Every week I went to a men’s medium-security jail in Northeast Philadelphia, where I helped run their library and also hosted a book club. The work there was really powerful and humbling for me, and such a contrast from teaching at Penn. At Penn, I often have students who complain that I assign too much reading, but at the jail book club, the guys would complain if I assigned a book that was too short!

I also did a collaboration with Ancil George [of the Penn Libraries]. I’ve wanted to make a librarian-themed music video cover ever since some folks at the University of Washington made a librarian dance version of Lady Gaga’s “Poker Face.” When Beyonce’s “Formation” came out, I immediately started thinking about how the line “come on, ladies, now it’s time to get in formation” applied to library workers getting information. Once I met Ancil, I pitched the idea of making a video at a school library in one of the West Philly elementary schools where he was working. I recruited local hip-hop artists to rewrite the lyrics and do the audio, and Waldo Aguirre at Annenberg did all the filming. It was probably the most fun thing that I’ve done in the four years I’ve been at Penn!

You’ve written about public libraries as heterotopias — a Foucauldian term which you describe as “spaces of ritual, spaces that are occupied at different times by disparate groups with purposeful meaning.” Do you think that university libraries can/could be classified as heterotopic? Why or why not?

University libraries are definitely heterotopias! A heterotopia is any space that opens up other worlds — so libraries, movie theaters and churches are all heterotopias because they can transport us (psychologically, emotionally, historically) to another place and time. A university library is a heterotopia in that while it is firmly grounded on a campus, its holdings can transport us to other universities, other places, other conversations. I think for most librarians, the term heterotopia might not be familiar, but the feeling it describes is deeply familiar, and key to why they’re drawn to the library — because it opens up other worlds and histories.