The cabinet is made of European spruce with a pearwood veneer. It is 70.75 inches (179.5 cm) tall, 31.5 inches (80 cm) wide, and 16 inches (40.5 cm) deep. It was probably used by Beethoven as a cupboard or a wardrobe and is now configured as a book case containing four shelves. (The shelves were probably added after Beethoven's death.)

The cabinet, when in Beethoven's possession, was located in the Schwarzspanierhaus ("the house of the black-robed spaniards") in Vienna. Beethoven moved into the house on 15 October 1825 (Memories of Beethoven, p. 131, n. 104) and lived in an apartment on the second floor until his death in 1827. (The building was demolished in 1903-4.) Based on a floor plan of the apartment included in the cabinet (below), we know it was probably located on the wall opposite Beethoven's bed in the larger room of the apartment. The floorplan was drawn by Alexander Thayer, the biographer of Beethoven, with notes by Gerhard von Breuning, who, as a youth, knew the composer. Breuning labels one piece of furniture "ich glaube hier ein Kleiderschrank" ("I believe a wardrobe here").

After Beethoven's death, his valuables and possessions were sold at auction. Breuning states in his Memoirs of Beethoven that the cabinet "must have been purchased by Fräulein Annacker", though records and a note from Alexander Thayer (posted inside the cabinet; see below) state that it was, in fact, purchased by one Ferdinand Piringer, director of the Vienna Concertes Spirituelles. After Piringer's death, the cabinet was bought by music publisher Franz Glöggl, who then sold it to Thayer around 1860, after the death of Glöggl's son, for whom it was originally intended.

In a statement made by Cecilia D. Saltonstall, who donated the cabinet to Penn, after Thayer's death the cabinet went to his niece, Susan Fox, in Cambridge, Massachusetts. Thomas Surette, a music educator from Boston, acquired it from Fox. In a 7 June 1935 letter to Henry S. Drinker, Surette offered to bequeath the cabinet to Drinker and included instructions to that effect in his will. Drinker was a well-known lawyer and a 1904 graduate of the University of Pennsylvania, where he also received an honorary doctorate in music 1942. Because he and his family were close to Otto E. Albrecht, curator of the Music Library at Penn, it is not surprising that when the cabinet was passed along from Drinker to his daughter, Cecilia D. Saltonstall, she decided in 1972 to present the cabinet to the Albrecht Music Library.

Though she planned to bequeath the cabinet to the library and have it transferred after her death, the threat of burglary had become an increasing concern in her New Hampshire neighborhood, and she decided, out of concern for its safety, to have the cabinet moved to Penn in the winter of 1983-84. She wrote Albrecht on 10 October 1983, "...New Hampshire is ripe for thieves. We got a bad threat in July but nothing came of it. We had detectives and police around for two weeks because the threat was so serious and so real."

On 29 April 1984, a reception was given on the sixth floor of the Van Pelt Library at the University of Pennsylvania in recognition of a few "good things" happening for the Music Library, among them being the donation of the Beethoven cabinet. The program included a lecture by Gary Tomlinson, a short musical performance by a some members of the university's choir and orchestra under the direction of Bill Parberry, and an inspection and dedication of the new library quarters and Beethoven's cabinet.

The cabinet is currently located in the Bodek Conference Room in the Marian Anderson Study Center on the 4th floor of the Van Pelt-Dietrich Library. The cabinet may be seen by appointment only. Please contact Liza Vick, head of the Otto E. Albrecht Music Library and Eugene Ormandy Music and Media Center.

For further information on Beethoven's apartment, see Memories of Beethoven: From the House of the Black-Robed Spaniards, ed. Maynard Solomon, trans. from the German by Henry Mins and Maynard Solomon (Cambridge: Cambridge University Press, 1992), pp. 57-66. 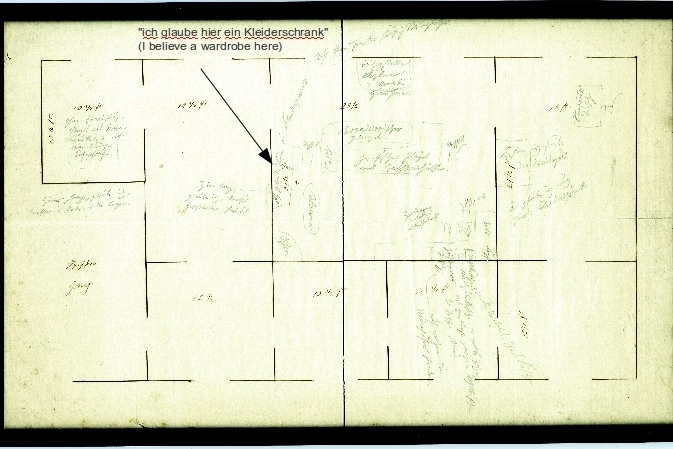 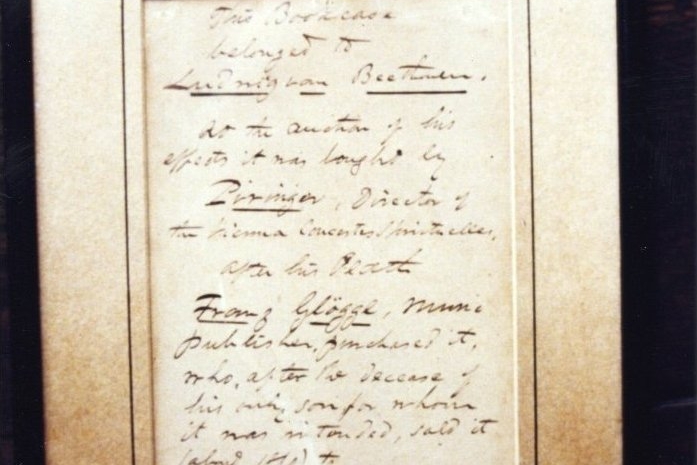 Note in Thayer's hand describing the provenance of the cabinet

Transcription:
This Bookcase belonged to Ludwig van Beethoven. At the auction of his effects it was bought by Piringer, Director of the Vienna Concertes Spirituelles, after his Death Frank Glöggl, Music publisher, purchased it, who, after the decease of his only son, for whom it was intended, sold it (about 1860) to Alexander W. Thayer.
Trieste, August 21, 1878. The inside of the cabinet, showing the latch at the top of the right door (left) and shelves (right)