In the 1950s, the Dental School was in search of a home for the contents of the Evans Dental Museum and although the Penn Libraries was considered to be a possible location for the Evans collection, the plan was jettisoned and the objects were carefully packed and stored. The books and manuscripts remained in the Dental Library. By 1990, the Dean of the Dental School had negotiated the transfer of Evans's manuscripts and his rare books to the Penn Libraries where they reside today.

In 1933, after the death of Edward Cameron Kirk (1856-1933), the Dental School’s first Dean, Kirk donated to the Dental library three thousand volumes and nested within the Kirk gift were one hundred and sixty seven volumes acquired by Thomas Evans while he practiced Dentistry in Paris from 1850 to his death in 1897. Based on an examination of the books in the Evans Dental Collection, his surviving papers and biographical information it is difficult to picture Evans the antiquarian and rare book collector. Tantalizingly, Evans records that when he was a dental apprentice in Philadelphia in the 1840s, he bought four books to guide him in his studies. No extant traces survive beyond this reference to his book collection.

As Evans's subsequent remarkable career in Paris demonstrates, he was the preferred dentist to the royal courts of Europe for three decades. However, he was also deeply interested in the Dental profession. He was an innovator, inventor and he partnered with the Samuel S. White Dental Company in Philadelphia to develop Evans own line of dental products. He published in professional dental journals on a variety of subjects, but what of his rare books?

Despite the lack of evidence of Evans purchasing rare books, the question remains - was he inspired to acquire early printed works on the history of Dentistry as his vision of a Dental Institute and Museum evolved late in his life?

As a whole, the collection documents the history of dentistry as it sheds its lowly unregulated status - treatment relegated to barbers and superstition – to its full acceptance by the Medical Profession as a separate branch of Medicine at the turn of the twentieth century.

Late in his life Evans’ close friend Dr. Henri Conneau (1803 – 1877), court physician to Napoleon III, offered to Evans his collection of 399 Protestant Bibles which are now in the Kislak Center. In the first volume of his Memoirs of the Second Empire, Evans recalls that Conneau’s collection of bibles were languishing on a stable floor. Evans rescued the Bibles. An analysis of the collection reveals that Conneau was interested in philology, or the study of development of language from written sources. The bibles were not collected for their beauty, but for their linguistic value. The collection includes numerous editions of the New Testament in many languages including European, African, indigenous American, Chinese and Japanese - to cite only a few.

In addition to his correspondence with European royalty and other notable cultural and political figures of the period, Evans' papers include six fragile notebooks, a small number photographs and a copy of his last will and testament. Also included are the many honors and citations he received throughout his professional career including his Ph.D. from Layfayette College and his Legion de Honneur. 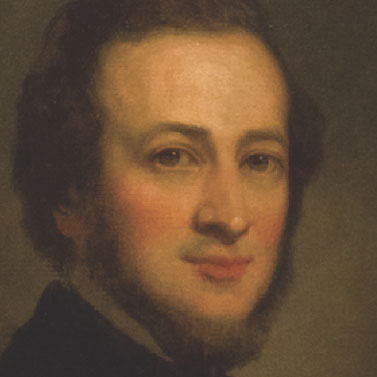 Thomas Evans (1823-1897) was court dentist to Napoléon III, Emperor of France, and became a celebrated member of the social elite—both aristocratic and belletrist—of fin de siècle Europe. He established confidences with many of the crowned heads of Europe and kept company with such cultural luminaries as Edouard Manet and Stéphane Mallarmé. His star quality, perhaps more than his professional ability, served to improve considerably the European perception of dental medicine.

Evans was born in West Philadelphia on 23 December 1823 and at an early age developed an interest and proficiency in dentistry, particularly in its mechanical aspects: drawing wires, rolling foil, making instruments. Dentistry was a scantily esteemed calling then, not yet a discrete—or lucrative—medical discipline, but over his ambitious parents' objections Evans entered into apprenticeship with a local dentist. He won what then amounted to accreditation in 1843, the same year he married the former Agnes Josephine Doyle, and established a private practice in Lancaster. When an exhibit on tooth-filling won a prize at the Franklin Institute, the young dentist came to the attention of Dr. John Clark, an expatriate who was aiding a dentist colleague in his search for an assistant to his Paris practice. Evans gladly accepted the invitation to join Dr. Cyrus Brewster's bustling office.

Thus Evans relocated to Paris in 1847, where what passed for dentistry was unregulated, permeated with quackery, and still regarded popularly as more a form of street entertainment than as a serious medical field. Beginning in partnership with Doctor Brewster but soon thereafter on his own, Evans developed a formidable clientele, banging the drum for his profession all the while. His first royal patient was Maximillian II, King of Bavaria, whom he saw in 1850 and from whom he won a decoration. Evans' papers indicate that he treated patients of royal houses ranging across Europe, from Sweden to Greece; those he knew in a professional or personal capacity even included dignitaries from the Far East and Asia Minor (among whose numbers was king Mongkut of Siam, best known from "The King and I" ). The royal clients who above all came to influence his life were the President, then Emperor, of France, Napoléon III, whose dentist he became in 1850, and the Empress Eugénie. Evans became their trusted confidant throughout and beyond the years of the Second Empire.

Through his practice and the globetrotting it demanded, the dentist established himself as a sort of informal emissary between various European interests. At the time of the American Civil War Evans took it upon himself to advise Napoléon III against recognizing the Confederacy, where his economic and strategic interests would seem logically to have lain. Despite his intimate contact with Secretary Seward, Consul Bigelow, and other diplomats, this segment of his career is little represented in the collection.

The upheaval created by the ill-conceived Franco-Prussian War, compounded by the capture of Napoléon III and several demoralizing tactical blunders, led to a groundswell of agitated populists, republicans, and assorted opportunists and malcontents, cresting in September 1870. This insurrection provided the backdrop for Evans's most glamorous heroic deed. The Empress Eugénie was compelled to abandon the Tuileries palace, and the country. For this clandestine undertaking she sought the assistance of none other than her court dentist. Using a false passport (contained in the collection) and an unusual route, Evans succeeded in spiriting the Empress out of France by carriage, rail, and yacht, passing her off as a patient traveling with her doctor across the Channel. Evans safely ensconced the imperial fugitive at Chislehurst, where she was met by the freshly released Napoléon III in March 1871. This entire affair assured more than ever Evans's high esteem among European royalty, and won him worldwide fame for his daring.

Evans returned to France in later 1871 amid astonishing destruction by the rampaging forces of the Commune, including the gutting of the Tuileries. His humanitarian efforts on behalf of the rank-and-file—such endeavors as the Sanitary Commission, advances in field medicine (including the use of rubber in repairing massive maxillo-facial injuries), the design of lighter ambulances, and the establishment of an American medical corps during the war—sufficiently offset his links to the ousted empire as to insulate him against political reprisals. He still lived with panache, with a flourishing practice and a firm position as a glamorous host to fashionable people of every stripe. In these post-imperial years he established the American Register, published in Paris to chronicle Americans sojourning abroad and to inform them of news from home.

Also during this time Evans carried on an extended affair with a young model and sometime stage actress named Marie Laurent with a not altogether respectable background. The dentist provided her a generous allowance and a villa, and installed her in a lavish apartment which grew to become an artistic salon of remarkable presence. Its habitués included poets Stephane Mallarmé and François Coppée (correspondence from whom can be found in the collection) and artists Edouard Manet and James Whistler, bringing standouts of belles-lettres into the dentist's social orbit. Evans became a formidable art collector—the University of Pennsylvania formerly owned several of his holdings, including Manets.

In 1879 Evans identified the body of Prince Impérial Louis Napoléon, slain in a misbegotten imperialistic war between Britain and the Zulus, by his dental work. He pridefully (and erroneously) claimed to be the first to thus identify an unrecognizable body. With the Prince Impérial's death the prospects for a Bonaparte imperial dynasty had definitively ended.

Evans published Fall of the French Empire in 1884 in support of the imperial regime. Under the orders of Eugénie that such political matters not be disseminated until after her death, Evans destroyed all copies, save one, which is part of the Libraries collection. More widely circulated were his Memoirs, also held here. Evans died in 1897; the obelisk marking his grave towers above Woodlands Cemetery. His will provided for a museum and dental institute at 40th and Spruce in Philadelphia, which joined with the University of Pennsylvania's School of Dentistry in 1912. Eugénie, yet living, was invited to the dedication of the new building in 1913 but was unable to attend. 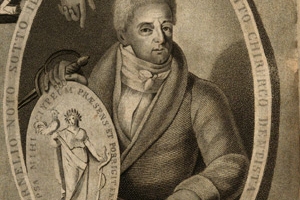 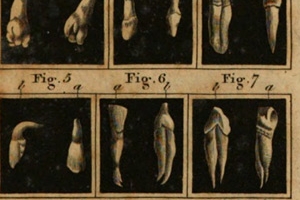 Treatise on the disorders and deformities of the teeth and gums, Thomas Berdmore, 1770 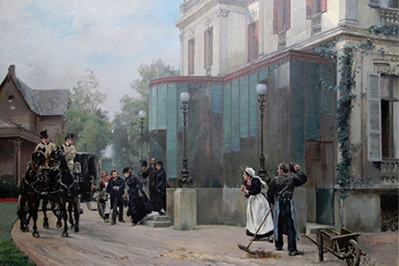 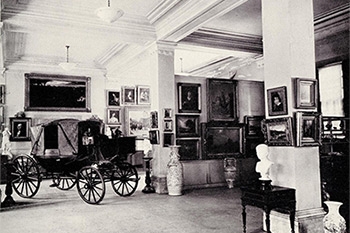 Photograph including the carriage in which Empress Eugenie escaped at the fall of the Second Empire.