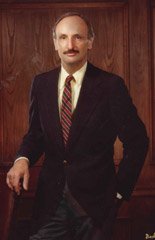 The Barton Hirst Lippincott Memorial Fund for Acquisitions in Biomedicine was established in 2011 by Elizabeth Barton Lippincott in honor of her father, Barton "Bart" Hirst Lippincott (July 26, 1925 - March 25, 2008, pictured), who devoted his professional life to medical publishing. The fund provides financial support for the acquisition of scholar materials in all formats for the Biomedical Library at the University of Pennsylvania.

view titles purchased through this fund