This book fund was established in 1937 with a bequest from Dr. George Stoecklein for the purchase of materials in support of the Department of Germanic Languages and Literatures.

"As the oldest academic program in German Studies in North America, the Department of Germanic Languages and Literatures at Penn combines a commitment to the traditions of Germanistik with a forward-looking perspective on developments in the field. In contrast to many graduate programs in German, we continue to believe in the importance of a solid grounding in the entire German literary tradition, from the Middle Ages to the present, as well as the history of the German language. At the same time, we vigorously support interdisciplinary study (as a quick glance at our diverse graduate group faculty shows) and an awareness of the latest methodological and theoretical movements (for example in film, women's studies, cultural studies, and post-colonial theory)."

Funds such as this are vitally important in maintaining the depth and breadth of the Library collections for Penn's scholars. 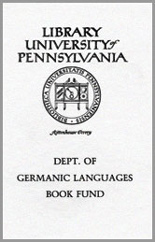