In 1940, Penn's Department of Music established an endowed Library fund for the Music Library.

Today the Otto E. Albrecht Music Library holds over 103,000 volumes of books, music, periodicals, and a large collection of microforms. At the core of the collection are musical scores in both scholarly and performing editions, literature on music history and theory, and microforms of primary sources.

Rare Books and Manuscripts relating to music are housed in the Kislak Center. The library's manuscript collections include the papers of Marian Anderson, Alma Mahler, Eugene Ormandy, and Leopold Stokowski, and the archives of the American Musicological Society and the Philadelphia Musical Fund Society. The Keffer Collection of Sheet Music, a part of the Musical Fund Society's archive, includes over 2,500 items published between 1790 and 1895.

The core of the Music Library's reference collection is shelved in the Marian Anderson Music Study Center, which also contains the Library's current periodical issues and the microfilm collection. The Center provides a quiet study space for readers as well as two microform reader/printers and connections for laptop computers.

The Eugene Ormandy Music and Media Center houses more than 34,000 sound recordings of Western music, as well as art and traditional musics of the world in LP disc, cassette, and compact disc formats. The Center provides audio and video facilities for instructional and recreational use, including 5 group viewing rooms equipped with DVD, Laser Disc, and multi-format video tape players.

Endowed Library funds for collection development such as this ensure that the Penn community will have current resources in perpetuity. 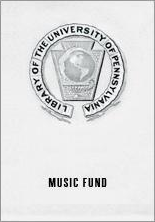