Established in 1948 by friends for the purchase of additions to the drama collection presented to the University of Pennsylvania Library by Mr. and Mrs. Maurice J. Speiser in memory of their son. 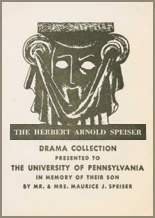