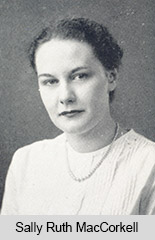 Established in 2010 through an estate gift, the John, Ruth and Sallie Ruth MacCorkell Endowment Fund supports acquisitions and preservation of materials in the field of British and American Literature. The fund was established by Sallie Ruth in honor of her parents, John and Ruth.

Sallie Ruth graduated from the University of Pennsylvania in 1946 with a major in English, and earned an additional degree from the graduate school of education in 1949. She served as a member of the English department of Philadelphia High School for Girls, her alma mater, for 28 years. She was also president of the Girls High Alumnae Association, was editor of the Alumnae News, and served as a board member of the Association of Alumnae of the University of Pennsylvania.