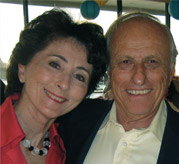 Established in 2007, the Lawrence J. Schoenberg & Barbara Brizdle Manuscript Initiative represents gifts both financial and material. It is the brainchild of Larry Schoenberg (C'53, WG'56), a private collector of medieval and Renaissance manuscripts.

The initiative is challenge-driven, with the Schoenbergs offering matching funds for the acquisition of manuscripts, preferably produced before 1601. In 2010 the Schoenbergs entered into an agreement with the Trustees of the University of Pennsylvania to donate their important and research-rich collection of manuscripts; the collection comprises mostly secular texts relating to the history of science and technology. Both Larry and Barbara have served on Penn Libraries Board of Overseers; they are the patrons behind the Schoenberg Center for Electronic Text & Image (SCETI), as well as co-founders of the annual Lawrence J. Schoenberg Symposium on Manuscript Studies in the Digital Age.