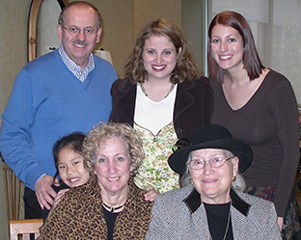 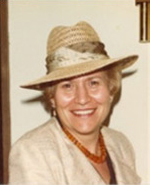 Mary Kaufman was born in 1928 in Pápa, Hungary, as Martha Maria Politzer, the seventh of eight children. At the age of 16, she and her siblings were deported to Auschwitz. The four youngest Politzers survived and returned to Hungary after being liberated. In 1945, she married another Holocaust survivor, Tibor Kaufmann, also from Pápa. In 1956, during the Hungarian Revolution, they emigrated to the United States with their eight-year-old son, Miklós. The family adopted American names - George, Mary and Michael - and settled in Passaic, New Jersey, to start a new life. George and Mary went on to have two more children born in the United States, Alexander (b. 1959) and Kathy (b. 1970). Mary and George were fortunate to celebrate sixty years of marriage in 2005 before they both passed away the following year. Mary died from glioblastoma, a very aggressive, malignant brain tumor that is largely untreatable today. Mary and George's second son, Alexander, had died years before of a pediatric brain tumor.

Mickey graduated from the University of Pennsylvania with a B.S. in Electrical Engineering from the School of Engineering and Applied Science in 1970 and a B.A. in Economics from the College of Arts and Sciences in 1971. He married Sherryl Ann Widowsky in 1975 and they have three children, Alex, Amanda and Andrea. Mickey is Assistant General Counsel and Vice President of Law at Johnson & Johnson, handling the legal affairs related to orthopedics and neuroscience. He has stayed involved with Penn as a member of the Penn Engineering Alumni Society Board, of which he was president from 2001 to 2004, the Penn Alumni Council, and his class reunion committees. His son, Alex, graduated from Penn in 2003.