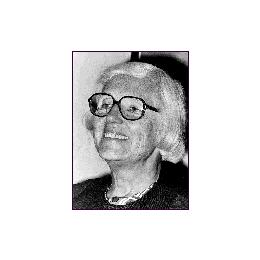 "The successive steps in the academic career of Jean Brownlee at Pennsylvania seem to reflect the progression in status of the women students for whom she was a principal champion for more than four decades."

Thus begins a 1975 citation to the longtime dean of the College for Women as she retired from one career, as CW's first woman dean, and took up another, as dean of advising for the newly merged men's and women's undergraduate liberal arts colleges at Penn.

By that time Jean Brownlee had been part of the Penn family for over 40 years, starting with her enrollment as a freshman at Penn. At that time, the College for Women was still on the drawing boards, and Penn's College of Arts and Sciences was exclusively for men. So, like many aspiring Philadelphia women of her day, Jean Brownlee entered by Penn's side door to the liberal arts, a School of Education that offered a bachelor of science degree in education and at the same time gave access to liberal arts classes. But the education school was already reshaping itself toward the graduate school it was later to become, and a women's liberal arts college was in the works. By the time she took her baccalaureate degree in 1934, the College for Women had been founded.

A Wide Ranging Career
Between 1934 and 1935, while she completed her M.A. here, Brownlee was also "directress" (as the term then went) of Sergeant Hall, Penn's undergraduate women's residence on 34th Street. In the next few years Jean Brownlee was to teach at all levels in Philadelphia, from kindergarten to high school, and at the college level at Temple. She also earned her Ph.D. from Penn in political science in 1942, wrote a financial history of Delaware, then spent three "War Years" as the chief local administrator for the Civil Service Commission -- the highest post held by a woman in Philadelphia. In 1947 she returned to Penn as assistant professor of political science and also took charge of the personnel office of the College for Women. In 1959, Dr. Gaylord Harnwell named her dean, and she undertook the series of changes that made CW stand out among its peers.

"From the beginning it was an administrative unit without its own faculty or its own funds. Its only power was persuasion," Dean Brownlee was to say years later.

As the education school became exclusively a graduate school, CW adopted a rigorous teacher preparation program in the arts and sciences, but one in which a talented and diligent student could earn both a baccalaureate degree and master's in four years. Still later, CW was to give shelter to a then-controversial idea in higher education, the Women's Studies Program, now Gender, Sexuality & Women's Studies and a thriving part of the College. Thematic study, crossover among disciplines, combined degrees and submatriculations were common to CW as the college sought to guide each woman as an individual through the maze of choices beginning to open up for her.

Under Dean Brownlee, CW's philosophy put a premium on advising. "The advisors in the College for Women are the generalists who seek to open eyes and open doors in this complex environment," Dr. Brownlee said in 1974. CW advising was so openly the envy of the men's College that when the merger took place in 1975, SAS Dean Vartan Gregorian named Jean Brownlee to the new post of Dean of Advising for all the undergraduates in the arts and sciences. Still later, she was to coordinate the formation of a coed alumni committee for the merged colleges.

A Founding Friend
Jean Brownlee's last major assignment for the University was a volunteer one, as the driving force behind a revived Friends of the Library of the University of Pennsylvania. Along the way she dedicated herself to many other projects that were not quite part of her job but were part of her work: helping found the women's Faculty Club here (now the Association of Women Faculty and Administrators, who presented her with its first Leonore Rowe Williams award in 1983), pursuing "home rule" for Philadelphia as secretary of the Citizens' Charter Committee; serving on the World Affairs Council, the Philadelphia Committee on Foreign Relations, the International Federation of University Women and many other organizations.

In 1979, Dean R. Jean Brownlee summed up her long association with Penn in these words: "I loved Penn, so I just stayed."

On January 23, 1995, almost a year after she suffered a severe stroke, Dr. R. Jean Brownlee died at the Quadrangle in Haverford at the age of 83. She left a bequest of more than $400,000 to establish an endowed fund for the libraries, whose director and vice provost, Dr. Paul Mosher, said of her, "Jean Brownlee always understood the Penn Library as central to learning and the life of the mind at Penn. She was our counsellor and friend. Her presence will be felt by countless future generations of students."