Penn alumnus Raymond B. Evans, W '36, was the lyricist for one of the world's most successful song-writing teams. In 2010, the Ray and Wyn Ritchie Evans Foundation honored the Libraries by donating the papers and memorabilia of Ray Evans and his wife Wyn to our special collections. The Collection includes photographs and letters documenting their life, along with awards, newspaper clippings, interviews and recorded music from the Ray Evans Archive. 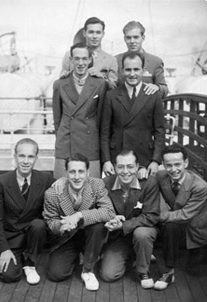 Ray Evans attended the Wharton School of Economics, graduating Phi Beta Kappa in 1936. He met his business partner, Jay Livingston (né Jacob Harold Levison), W'36, at the University of Pennsylvania in 1934 through the Beta Sigma Rho Fraternity. They traveled with the Penn Orchestra on cruise ships during their spring and summer vacations, which helped the two young songwriters develop their signature style of music. A trip to Havana was particularly influential.

Livingston convinced his friend to continue their partnership after graduation, with Evans writing all lyrics and Livingston composing. The duo had some early success in New York with a song co-written with Olsen and Johnson for the latter's 1941 musical review, Hellzapoppin. Following World War II, Evan and Livingston's career took off after they moved to California. In 1945 they began work at Paramount Studios, where they earned three Academy Awards for songs including, "Mona Lisa," "Que Sera, Sera," "Silver Bells" and "Buttons and Bows". The duo later freelanced, composing music for eight movies at Universal, including the Oscar-nominated song "Tammy" for Tammy and the Bachelor. They also wrote theme songs for television shows such as Bonanza and Mr. Ed. Their first Broadway musical opened in 1958. Evans and Livingston were inducted into the Songwriters Hall of Fame in 1977 by the Songwriters Guild of America, and have been called the last great songwriters of Hollywood. They received their star on the Hollywood Walk of Fame in 1995, among many other awards achieved in their long and prolific career.