The Dental School's earliest benefactor, Thomas Wiltberger Evans, built a prestigious dental career in France, becoming the dental surgeon and confidant of Napoleon III. But he never forgot his native Philadelphia, leaving his fortune to create a dental institute and museum here "not inferior to any already established." His bequest would became the Thomas W. Evans Museum and Dental Institute at the University of Pennsylvania.

Twelve boxes of his papers from 1850-1913 reside at the Annenberg Rare Book & Manuscript Library at Penn. His papers consist primarily of correspondence that he received while in France. Correspondents include European royalty, such as Empress Eugenie, Napoleon III, Empress Victoria, Frederick III, Queen Alexandra, Edward VII, and Isabella II, as well as the poet Stéphane Mallarmé, and Evans' wife Agnes. In addition there are memorabilia—such as his journals, notebooks, last will and testament, sketches, and photographs.

The Pennsylvania Gazette featured Dr. Evans in the November/December 1999 issue. He was a fascinating person and generous benefactor. Collection development support from his fund continues to benefit the Dental Library almost a century later. 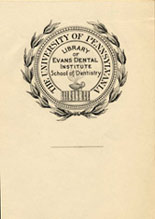