This exhibition highlights Bryan’s portrayals of strong and resourceful women in his art. It was originally held in conjunction with Writing Across Genres, an exhibition of works by African American women writers in the Joanna Banks collection, which was on display in the Kamin Gallery on the first floor of Van Pelt-Dietrich Library Center. Many of these works were made for books of poetry, including Freedom Over Me, ABC of African American Poetry, and Aneesa Lee and the Weaver’s Gift. Older women are reflected in preparatory drawings for The Dancing Granny as well as sketches of Bryan’s paternal grandmother, Sarah Bryan, who was an inspiration for him. Two works were made for his good friend, Eva Brussel [Mason], a fellow student at Cooper Union, with whom he corresponded for decades, beginning during his time serving in the U. S. Army in World War II. Yet others accompany the music in two books of Black American spirituals, Walk Together Children and I’m Going to Sing, in which both the music and the illustrations are linoleum block prints.

A major exhibition of Ashley Bryan’s works is planned for the spring of 2023, the one hundredth anniversary of Bryan’s birth.

Learn more about the Ashley Bryan Archive at Penn 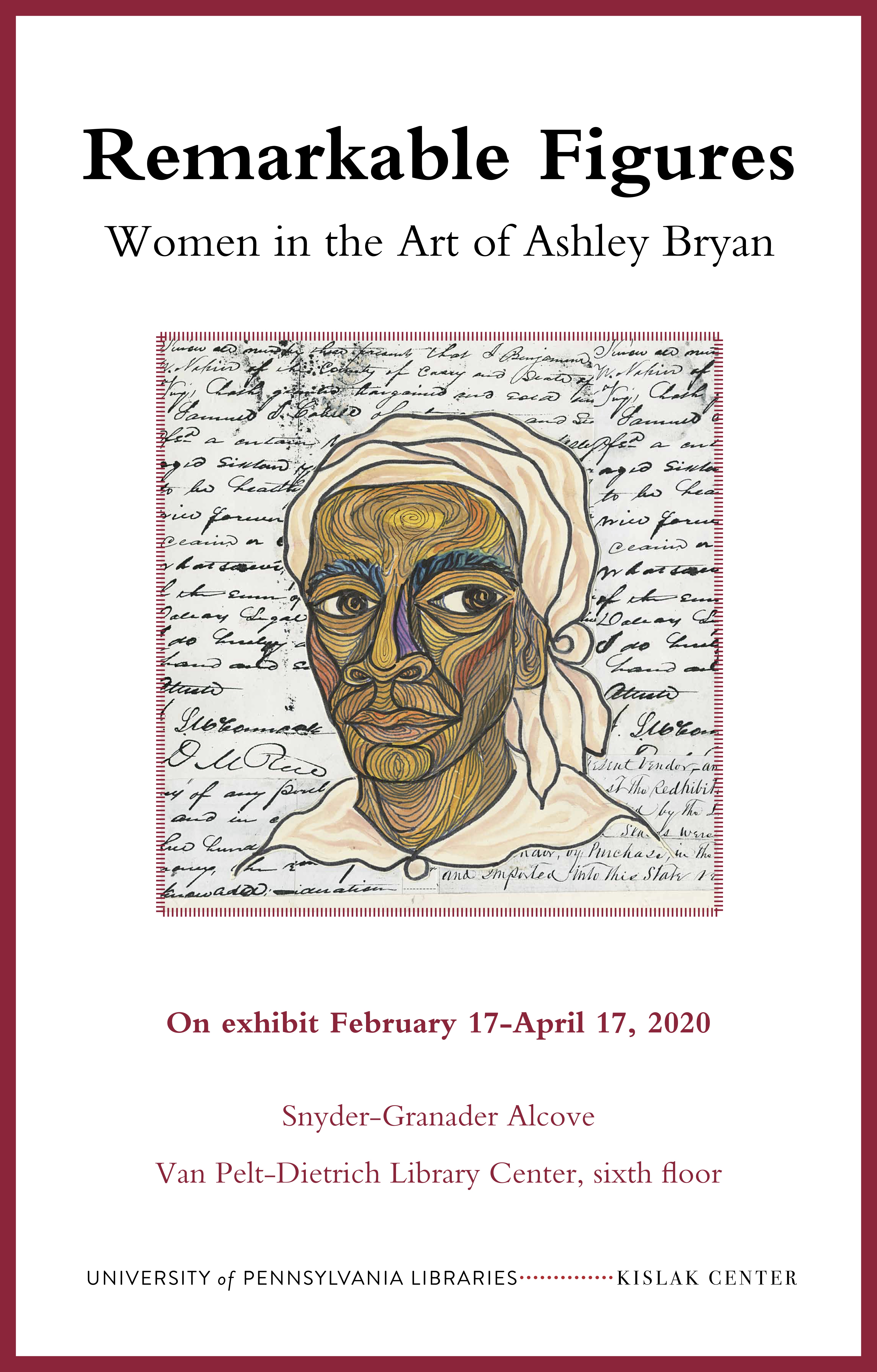 View information about and installation photography from the exhibition in the Kislak Center, February-April 2020.

On the Naming Day ceremony
my parents named me
Mariama, "Gift of God."
My parents calling
"Mariama! Mariama"
sings on in me.

This box was created for and originally given to Bryan's friend and fellow Cooper Union student Eva Brussel [Mason]. He made it while stationed in France during and immediately following World War II.

Six sketches of the Dancing Granny

The Dancing Granny is the story of Granny Anika, who can’t resist dancing when Spider Ananse sings his songs. Once he gets Granny dancing, he uses his sway over her to steal the vegetables growing in her garden. However, Granny gets her revenge when she pulls Spider to her with her hoe and makes him her dancing partner.

Before the sun, Aneesa rises
To quickly dress herself
And dress the loom
That crowds her tiny room.

Who
can be born
black
and not exult!

My hair, a hive of honey bees.
Is a Queenly glory
Crackles like castanets
Hums like marimbas

Sarah Bryan was Ashley Bryan’s beloved grandmother on his father’s side. There are many drawings of her in the Ashley Bryan Archive.

Freedom Over Me recreates the lives and dreams of eleven slaves, whose names or descriptions, in the case of “one Boy more” and Peggy’s “child,” turned up on an 1828 appraisal of the estate of Cado Fairchilds. Ashley Bryan purchased the document twenty years before he wrote and illustrated this profoundly moving work. He gives each of these enslaved individuals faces and voices, reflecting their struggles and their hopes. Three of the women, Betty, Mulvina, and Peggy, are highlighted in this exhibition.

I’m not as strong
as I once was,
but my singing voice
is as strong as ever.

In my African village
I heard the chant of
my African name,
“Niami! Niami!
It sounded like
the melody that it means.

This is the original estate appraisal, the primary slavery document used in Freedom Over Me. It served as the basis for the story Bryan creates, giving life to each of the characters. The names of nine of the slaves in the book—Peggy, Charlotte, Stephen, Mulvina, Jane, Athelia, Qush, Bacus, and Betty—are found on this document. The remaining names, Dora and John, were given by Bryan to unnamed children mentioned in the appraisal.

I am special flower gardener
to the Fairchild’s estate.
I do the regular cleaning
in the Big House.
Under Mrs. Fairchild’s direction I set the flower arrangements,
help with all interior décor.

As I work
gardening for owners,
I am thinking
if I were free,
I would acquire my own
acres of land.

Ashley Bryan’s love of poetry is intertwined with his love of art, as can be seen throughout his work. Here he uses the alphabet “to introduce a world of poetry and art to all children.” The illustrations give the passages Bryan has chosen a visual element that complement the aural. A handful of important African American women poets—Maya Angelou, Mari Evans, Eloise Greenfield, Audre Lord, and Margaret Walker—are shown in this exhibition.

Without eXpectations
there is no end
to the shock of morning
or even a small summer.

Bryan’s images of women reflect their strength and determination while simultaneously revealing his love and admiration of them, young and old alike.

As Granny Anika, the Dancing Granny, admits, “ ‘Brother Ananse sings the danciest tunes. I just can’t stay still when the music sweets me so. That I know.’ ”

Bryan’s portraits of his beloved grandmother show a woman whose life is etched on her face and her body.

To wind yarn enough to make the cloth one plans,
One adds, subtracts, and multiples the strands.
Strokes of luck in weaving are too rare.
Far wiser, then, to plan ahead with care.

The print reproduced on the dust jacket of this re-issue is a color version of the print used in the original 1974 edition of Walk Together Children, though not on the original dust jacket. View the linoleum block print of this image.

I am the Fairchilds’ cook.
I work in the Big House
day in, day out,
making special meals for the
Fairchilds,
plain food for the slaves.

Bryan drew the sketch on which this painting was based while in France as a U. S. soldier during and immediately following World War II. The painting was originally given to his friend Eva Brussel [Mason] and then given by her family to Penn Libraries in 2019 to join the Archive.

This print is from Bryan’s second book of African American spirituals, I'm Going to Sing.

First and foremost, I would like to thank Ashley Bryan and the board of the Ashley Bryan Center for entrusting Penn with Ashley’s amazing archive. It has been wonderful working with them and we look forward to a long and productive collaboration sharing Ashley’s legacy.

Thanks go as well to the exhibition team for the design and installation of the original exhibition; to the conservation team for creating the original mounts; to Emily Martin for photography of the installation and Andrea Nunez for photography of the individual works; to Eric Dillalogue, for facilitating digital photography for the website; and to John Pollack who, with assistance from Leslie Vallhonrat, created this online exhibition. It was sad to see the exhibition close in mid-March, so it is exciting to be able to share it with you now.