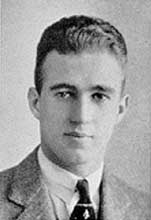 Carleton B. Robinson was a proud graduate of the Wharton School. A member of the Class of 1933, he felt that the education he had received at Penn set the course for the rest of his life. He often remarked "when you tell people you went to Penn, and to the Wharton School, that's all you have to say."

Carleton established the Carleton and Mary Robinson Fund for Library Acquisitions in 1995. At the time, he said he wanted to "do something that will benefit all students" and that support for the Library seemed a good way to accomplish this goal. The principal of the Robinson Fund is invested and thus will grow over the years. The income generated by the Fund will be available every year for the purchase of books and other library resources.

At Penn, "Carl" was a member of the Delta Kappa Epsilon fraternity, a "Deke." He had a particular interest in crew, but followed most Penn sports throughout his life. He was an avid reader, commenting that his education at Penn prepared him to find the information he needed for any new endeavor.

Carleton Robinson died in 1996. His wife, Mary, continued to support the Fund in his memory until she passed away in 2018. Following Carleton's death, the Library asked Mary to share some insights into her husband, friend, and "fellow traveler:"

His love for adventure led him to be an avid reader. He would always study the world areas that he hoped to visit and discover. He was fortunate to actually be able to see most of the places he wanted to see in our trips around the world.

Our river trips included the Nile, the Rhine, the Amazon, the Yangtze, and the Mississippi. Carl also loved to tour by train, and our trips took us across Canada, into Mexico, and on the Orient Express from Zurich to Istanbul.

He had a great love of the sea and all its moods. He took pride in being the captain of his own cruisers at home, and this enabled him to be often on the water.

Carl worked very hard, but at the end of the day he devoted himself to children and family life. He always took a very positive attitude toward any new challenge. His home was his pride and joy, and he took great pleasure in sharing it with friends and family.

He was manifest in acts of service and unselfish in contributions to the business world and society. He was many times the giver and never the taker.