Established in 1939 with a bequest from Dr. Clarence J. Marshall, University of Pennsylvania Doctor of Veterinary Medicine 1894, this fund supports the acquisition of resources for the Veterinary Medicine Library at Penn. His bequest was doubled by gifts from his friends and colleagues.

Dr. Marshall had a long and distinguished career at Penn. He was an outstanding student and in 1894 was captain of the crew team. Following graduation, he went into private practice, but by 1890 he was a demonstrator at Penn's School of Veterinary Medicine. By 1910 was a full professor, serving as a member of the Penn faculty for 28 years.

A lieutenant-colonel during World War I, he was one of five veterinarians chosen to organize the U.S. Army Veterinary Corps. He spent months in France studying the French and British veterinary systems, and for his work, was made an honorary member of the Distinguished Service Order of Great Britain by King George V, receiving the decoration from the hands of Edward, Prince of Wales.

In 1935, Penn conferred upon him an honorary Doctor of Science degree, noting: "you have been a constant source of inspiration to your colleagues, while hundreds of students have appreciated not only your abilities as a teacher, but your kindly and sympathetic attitude toward them and their problems....and your writings in the field of veterinary science have been accorded internation recognition." 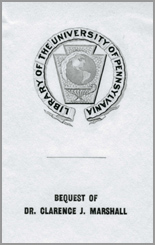