Rev. John Wiley Faires' former students and other admirers established this fund "paid to the University of Pennsylvania, the income to be used for the purchase of books on classical subjects...a proper addition to the collection in the library of the university." Dr. Faires would be pleased with this lasting tribute, which inspires each new generation of Penn students.

After his graduation from Penn, where he was a member of the Philomathean Society and Phi Beta Kappa, and several years of teaching, he founded the Classical Institute in Philadelphia, and taught there until his retirement in 1888. During those years over 1,500 students enrolled, and many became prominent citizens.

William Pepper, future Provost of the University of Pennsylvania, Adolph G. Rosengarten, future benefactor of the University Library, and an impressive list of Penn alumni were educated at the Classical Institute. One of his students, Robert Ellis Thompson, later professor of social science at Penn, noted that parents enrolled their sons in the Institute knowing "they would be trained in sound scholarship, not by the easy and spoon-feeding methods of modern pedagogy, but in the struggle with difficulties, and the acquisition of intellectual muscle which comes of struggle." His accolade can be found in Charles J. Cohen's Memoir of Rev. John Wiley Faires on our shelves. 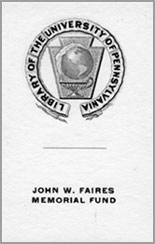