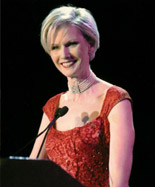 Penn alumna Laurie Burrows Grad CW'66. The collection comprises over 6,000 cookery titles, primarily from the late twentieth century, covering the wide range of topics on food and cooking that appeared in this country during the last thirty years.

When asked how her passion for cooking and cookbook collecting began, Laurie replied,

"At five years old, I cooked omelets and pancakes for my family. By nine, I was ordering frog legs and snails. My palate was insatiable for great food and I ended up cooking for lots of my friends in my apartment at Penn. I started collecting cookbooks by the time I was in high school. My favorites were old cookbooks or regional ones that told a culinary history of each area. It justified my history major and put my degree to good use." 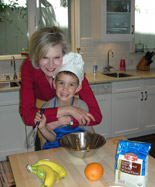 Cookbooks Laurie has authored include: Make It Easy in the Kitchen; Make It Easy Entertaining; Make It Easy, Make It Light; and Entertaining Light & Easy. Each has been nominated for the cookbook industry's highest awards. On television, she appeared weekly for seven years as the food expert on the nationally syndicated "Hour Magazine." She was also a regular contributor to the Fox "Good Day L.A. Show," and hosted her own cable TV cooking show, "Laurie Cooks Light & Easy," which aired on The Learning Channel as well as The Travel and Living Channel. Laurie spent 18 years as contributing food editor at Los Angeles Magazine, and has written articles for Bon Appetit, Redbook, Woman's Day, Food & Wine, Good Housekeeping, and numerous other publications. She is currently an editor and writer for one of the top food sites on the web, www.epicurus.com.

After reviewing cookbooks for 25 years, Laurie declared, "My shelves were brimming over with books. I decided to donate my collection so that others could use the wonderful information. Since Penn had helped me with my love of history, I felt the University Libraries should have my collection."

The Laurie Burrows Grad Collection is supported by an endowed fund, which allows it to collect further works. It complements the two other main cookery collections in the University of Pennsylvania Libraries, those of Esther Aresty and Chef Fritz Blank. Together, these three collections provide both range and depth for students and researchers at work in this field.