Manuscripts are cataloged in the Library's online catalog, Franklin (links are provided in catalog records to online facsimiles, when available). Search results may be narrowed according to facets including format, language, and subject. Note that searches on the term "manuscript" will produce results that may include medieval, early modern, and modern manuscript collections.

Nearly all of the medieval and early modern manuscripts held in the Kislak Center have been fully digitized and are available for viewing through multiple portals, without access restrictions. Searches may be refined by language, subject, date, collection, and other categories.

The most up-to-date digital resource is Colenda. It is a system for long-term preservation and access to digital assets stewarded by Penn Libraries. It is a project of the Libraries, developed using the Samvera software framework. At this time, content accessible to the public in this application is in the public domain and is therefore available for public use, or where indicated, is of undetermined copyright.

OPenn, an earlier platform, contains complete sets of high-resolution archival images of manuscripts from the University of Pennsylvania Libraries and other institutions, along with machine-readable TEI P5 descriptions and technical metadata. All materials on this site are in the public domain or released under Creative Commons licenses.

The Kislak Center possesses about 360 manuscripts dating before the fifteenth century. They include codices, scrolls, fragments and unbound documents. Historically, items have been acquired for their textual or historical significance rather than for illuminations, illustrations, bindings, or other physical characteristics. More recently, the Lawrence J.Schoenberg and Barbara Brizdle Manuscript Initiative has provided for the acquisition of illuminated, illustrated, and glossed codices.

The bulk of medieval manuscripts acquired before this century relate to religion and the Roman Catholic Church, in particular, liturgy and devotions; theology and doctrine; and ecclesiastical administration. Holdings also include many works of philosophy and literature, as well as many documents concerned with official and legal matters, property, and finances. The majority of Penn's medieval manuscripts originate in Italy and France and are written in Latin.

The gift of the Lawrence J. Schoenberg Manuscript Collection in 2011 has brought together many of the great scientific and philosophical traditions of the ancient and medieval worlds, documenting the extraordinary achievements of scholars, philosophers, and scientists in Europe, Africa, and Asia. Often illustrated with complex diagrams and stunning imagery, these manuscripts bring to the present the intellectual legacy of the medieval past.

The Kislak Center's holdings include bibles, breviaries, missals, sacramental handbooks, and many works of devotional literature. Among these items is the oldest of the department's few Greek manuscripts--a leaf from an eleventh-century liturgical book, containing part of the Byzantine Easter service. A book of hours, use of Rouen and dating from 1475, was acquired in 2007 through the Schoenberg/Brizdle Manuscripts Initiative: it was illuminated for a local woman and includes fifteen arched miniatures and twenty-four calendar miniatures. Theology and doctrine are represented by many manuscripts containing theological treatises, collections of sermons, and other doctrinal works.

Ecclesiatical administration is documented by many works discussing church procedure, canon law, statutes of religious orders, and the like. These include a thirteenth-century copy of the Decretals of Pope Gregory IX (acquired in 2007 through the Schoenberg/Brizdle Manuscripts Initiative) and a thirteenth-century manuscript containing two formularies of the Roman curia, one of which was published by Henry Charles Lea in 1892.

Philosophy and school texts are well represented among the Kislak Center's medieval manuscripts. These holdings include commentaries on the Sententiae of Peter Lombard; a fourteenth-century copy of William of Ockham's work on logic; works on Latin grammar and composition; and several works on astronomy, including a fourteenth-century copy of a Latin translation of the work of Geber. The oldest of the library's many Latin Aristotle texts and commentaries also date from this period.

Literature holdings include works of poetry and of prose, both in Latin and in vernacular languages, especially French. Among these is a chansonnier, dating from approximately 1400 and containing over three hundred poems by Guillaume de Machaut, Eustache Deschamps, and others; and a fourteenth-century copy of Seneca's Tragedies with a commentary by Nicholas Trivet.

Government and commercial documents form a great part of the Kislak Center's early manuscript holdings. Some are official decrees and include the Library's oldest Latin manuscript, a document issued by Emperor Otto III in the year 1000. Most of these documents, however--both in Latin and in vernacular languages--consist of notarial records, property surveys, legal documents, accounts, and other financial records.

In addition to its original medieval manuscripts, the library owns microfilms of nearly one thousand medieval codices from other repositories. See:

The Henry Charles Lea Library also holds a collection of microfilms from other repositories, relating mainly to the Papacy, Byzantium, the Levant, and the Crusades. See: 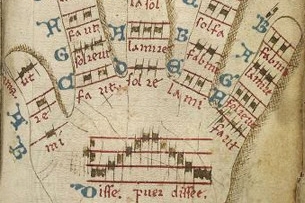 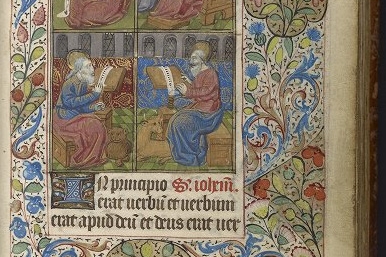 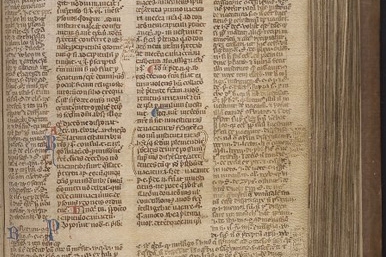 [Decretales Gregorii IX] Compilation of canon law made by Raymond of Peñafort by order of Pope Gregory IX. France, between 1280 and 1299 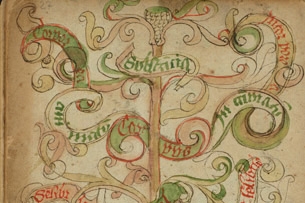 "Tree of Human Nature," from an anonymous treatise on natural philosophy produced in Mainz, Germany, between 1485-1499 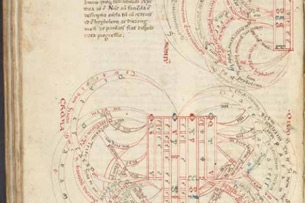